We usually want to develop and deploy applications and work with the Raspberry Pi (RPi) from a laptop or desktop computer. Use an external keyboard and an extra monitor only when there is no network access to the device. Your computer and RPi is likely connected to the same office or home network by using LAN connections or a WiFi router. The best way is to assign an ip address to the RPi to make sure it’ll always have an ip address that we know to be able to use SSH, remote desktop and application deployment tools. We have two popular options.

Note that you must properly set the ip address and the values of netmask, gateway, network and broadcast for your actual network configuration.

Office or home routers distribute ip addresses to machines requesting an ip address over DHCP. It’s highly recommended that choose this option when you have several other devices on your local network, or your Raspberry Pi is a ‘mobile’ computer. You only need to know the MAC address of interface eth0 and/or wlan0. This option offers a better way to setup your Raspberry Pi connections.

a.) Open the Terminal and get the MAC address of your eth0 and/or wlan0 interfaces:

Notice the HWaddr (MAC) values. You’ll need them at the DHCP configuration.

b.) Open the configuration file /etc/network/interfaces that contains all known network interfaces. Open the editor with command nano: 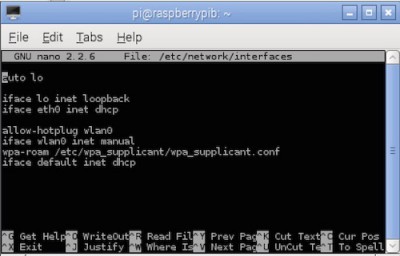 It has to contain ‘dhcp’ and should look like this if you have added a USB WiFi adapter:

If you want be sure what it is, open and check out the WiFi connection configuration file of /etc/wpa_supplicant/wpa_supplicant.conf as well.

Read the documentation of your WiFi router or DHCP server, or consult with your network administrator if you do not know how to setup a DHCP entry.

On a Mac, an AirPort WiFi router can be configured as: 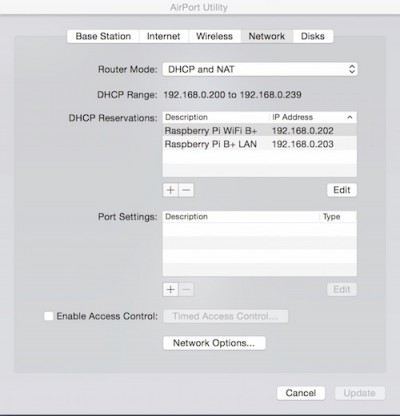 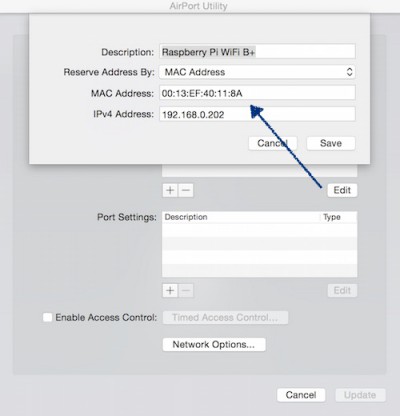